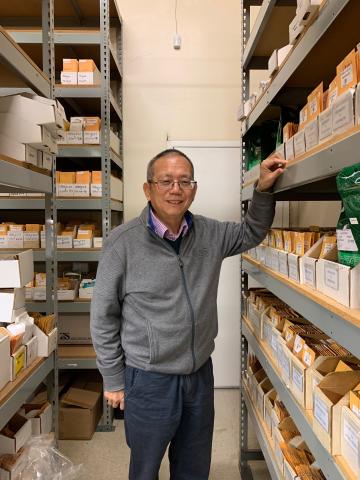 It’s no secret that Dr. Yaojin Peng eats a lot of lettuce.

Having spent 26 years breeding lettuce, Peng knows what he’s looking for. And when he’s evaluating new varieties, he can’t help but cut into a head of lettuce and see what he’s created.

But lettuce breeding is a lot more than just taste. It’s a science and an art that requires a tremendous amount of patience, Peng says.

And, as a grower, understanding your varieties can save you time, money, and give you better harvestability and yield.

Before Peng became an accomplished lettuce breeder, he traveled quite a bit to build his knowledge and education on plant genetics and breeding.

Born in China, Peng got both his bachelor’s and master’s degrees there in the 1980s. In the late 1980s/early 1990s, Peng pursued his PhD in the United Kingdom. Then he moved to the United States to conduct his post-doctorate research at Texas A&M University.

“I was a cotton geneticist/breeder in China,” he shares. Initially, his main research in China and after involved field crops like barley and sorghum. Lettuce was still unknown to Peng.

During this time, the consumption of lettuce was on the rise. In the 1940s, iceberg lettuce made up 95% of the lettuce grown in the U.S. While iceberg was certainly popular for its hardiness and ability to withstand long-distance shipping and storage, other lettuce types erupted by the end of the century – from butter to romaine to leaf lettuce. Lettuce was returning to the forefront of the culinary world as people embraced better health and more natural foods.  Consumers were embracing more diversity in their foods.

In the 21st century, lettuce even began growing as gourmet fare. Mixed greens and nutrient-dense greens, as well as spicy leaf vegetables like arugula, mizuna and mustard, began cropping up on restaurant menus everywhere.

Peng entered this evolving world of lettuce in August 1995. He moved from Texas to Salinas, California to work on all types of lettuce. His portfolio ranges from whole head romaine to iceberg to green leaf to baby leaf and even sweet baby broccoli with Synergene Seeds. From 2009 to 2014, Peng worked in the romaine and green leaf lettuce breeding programs at Syngenta Seeds where he came up with quite a few patents. Then, in July of 2014, Peng joined Vilmorin Mikado USA to take over its lettuce breeding program.

How does Peng feel about his transition to lettuce breeding? “I did pick a good choice,” he says, “because I enjoy the weather we have in the Salinas Valley.”

But Peng’s effect on the lettuce breeding industry goes much deeper and is much more recognized than just his enjoyment of California’s sunshine. His career has earned him 31 patents and counting. His expertise rivals no other. In fact, Peng has bred some of the most popular romaine lettuce varieties. ‘Bluerock,’ his latest patented romaine, is enjoying market share not only in California, but  also in all of North America.

Peng also plays an integral part in the International Bremia Evaluation Board’s tracking of bremia disease – or downy mildew – of lettuce. The group is constantly identifying new races of Bremia lactucae that pose a significant threat to the lettuce industry.

It typically takes five to six cycles to accomplish the homozygosity before you can have a pure line to start a large-scale trial in a commercial field, Peng explains. If one cycle takes one year, that’s five to six years of time, plus an additional 1 to 2 years to see how it performs in a commission trial before commercializing it.

Maintaining a close relationship between growers and breeding companies is essential during this process because it ensures breeders know what growers are looking for so they can take early actions and focus on those issues. By the time you have a lettuce variety that can be purchased, nine to 10 years have passed.

Peng has found ways to help speed up this process by using different growing regions to get two cycles done in one year’s time.

“The breeder always has a job to do,” Peng says. “It’s a long-term commitment, and you have to be flexible.”

There are a few certainties with growing lettuce. Unfortunately, the plant draws many insects.

Lettuce also suffers from diseases like sclerotinia and downy mildew.

Therefore, the goal of the lettuce breeder is to create varieties that are more resistant to these lettuce pathogens. Peng spends a lot of his time focusing on breeding lettuce varieties with multi-resistances to diseases and pests, improved shelf life, and adaptability to a wide range of weather conditions.

Peng uses a process that combines conventional methodologies and new technologies to create an ideal lettuce variety. Breeding is a long process, and the conventional methods are still valuable, but new technologies make the process more efficient, Peng says. “For example, molecular markers are applied in the process,” he explains. “The application of molecular markers is one of the keys to the success of my lettuce breeding programs as I am able to directly look at the plants at the genotypic level in addition to the phenotypic level.”

Peng loves the creation and innovation part of the lettuce breeding process. “I feel very accomplished when I have a new variety that is achieved and commercialized in the market,” he says.

In addition to his two popular romaine lettuce varieties, Peng’s newest romaine varieties he’s most proud of include ‘Bluerock’ and ‘Carivzo,’ which are both quickly taking market shares in the Salinas Valley and the Desert South West production areas.

Also, Peng and his team are currently working on a lettuce variety that will improve efficiencies for farmers by making mechanical harvesting easier. This lightbulb-shaped iceberg lettuce allows the mechanical harvester to come underneath the stem and get a cleaner cut and a more harvestable head. Since Vilmorin Mikado USA uses a direct sales approach, they can stay ahead of these market needs and match lettuce’s attributes to them.

This is what makes breeding a fascinating discipline to follow for everyone, but especially growers.

“Quality genetics help growers reduce their cost and increase their crop yields and qualities,” Peng explains. “Breeding is a science, but it’s also an art. You have to be creative and always be looking for something valuable that the plant can provide.”